The Continuously increasing demand of the food necessitates the rapid improvement in food production technology. In most of the developing countries, the national economy mainly depends on the Agriculture. But these countries do not able to make proper use of agricultural resources due to the high dependency on rain. Nowadays different irrigation systems are used to reduce the dependency of the rain and mostly the existing irrigation systems are driven by electrical power and manually ON or OFF scheduling controlled. The proposed system is usually designed for ensuring the proper level of water for growing up the plants all through the season. In addition, it provides maximum water usage efficiency by monitoring soil moistures at optimum level and it saves the electrical energy by turning off the motor when there is no water in the pump. The traditional methods are not efficient in controlling the illegal entry and it requires more labour work and time etc.

India has agriculture as its primary occupation. According to IBEF (India Brand Equity Foundation), 58% of the people living in rural areas in India are dependent on agriculture. As per the Central Statistics Office 2nd advised estimate, the contribution of agriculture to the Gross Value Addition (India) is estimated to be roughly around 8% which is very significant contribution. Under such a scenario, the usage of water especially the fresh water resource by agriculture will be enormous and according to the current market surveys it is estimated that agriculture uses 85% of available freshwater resources worldwide, and this percentage will continue to be dominant because of population growth and increased food demand. The emerging global water crisis: In addition to managing scarcity and conflict between water users, the available fresh water is further contaminated by the human and animal population and the pollution levels have increased at an alarming rate. This if continues, will be leading to limitation of food production which in turn will affect the human productivity and thus the entire ecosystem will be affected in the years to come. The primary and the most important reason for this problem is the tremendous increase in the population which has increased at a rate which is faster than the food production rate. This population growth especially in water short countries will directly have an impact on its growth on the world map. The food production needs to be increased by at least 50% for the projected population growth. Agriculture accounts for 85% of freshwater consumption globally. This leads to the water availability problem and thus calls for a sincere effort in sustainable water usage. For a variety of reasons, feasible expansion of irrigated agriculture will be able to accommodate only a portion of this increased demand, and the rest must come from an increase in the productivity of rain fed agriculture. In the absence of coordinated planning and international cooperation at an unprecedented scale, the next half century will be plagued by a host of severe water related problems, threatening the wellbeing of many terrestrial ecosystems and drastically impairing human health, particularly in the poorest regions of the world. This calls for planning and strategies to use water sensibly by utilizing the advancements in science and technology. There are many systems to achieve water savings in various crops, from basic ones to more technologically advanced ones. One of the existing systems use thermal imaging to monitor the plant water status and irrigation scheduling. Automation of irrigation systems is also possible by measuring the water level in the soil and control actuators to irrigate as and when needed instead of predefining the irrigation schedule, thus saving and hence utilizing the water in a more sensible manner.

Smart agriculture using IOT system is powered by FPGA, and consists of Temperature sensor, Moisture sensor, water level sensor, DC motor and wifi module. When the IOT based agriculture monitoring system starts it checks the water level, humidity and moisture level.It sends these data from the sensor to the FPGA for processing and saves the data to the azure database.This database can then be accessed in a farmers mobile using a  android application which will tell about the sensor levels. It sends SMS alert on the phone about the levels. Sensors sense the level of water if it goes down, it automatically starts the water pump and as soon as it reaches the required level it stops the pump.Thus water can be saved.

Why use Intel FPGA?

Since processing done using FPGA are fast and less powerconsuming as compared to arduino and other microcontroller hence FPGA from intel is used.Also the data can be porcessed in real time and hence would affect the performance of the system greatly. 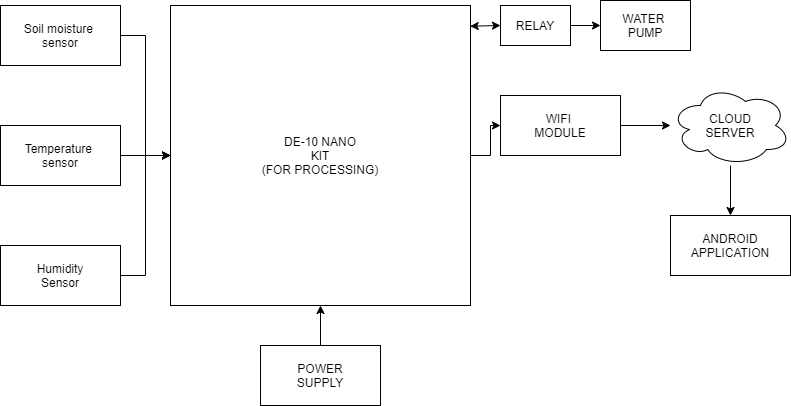