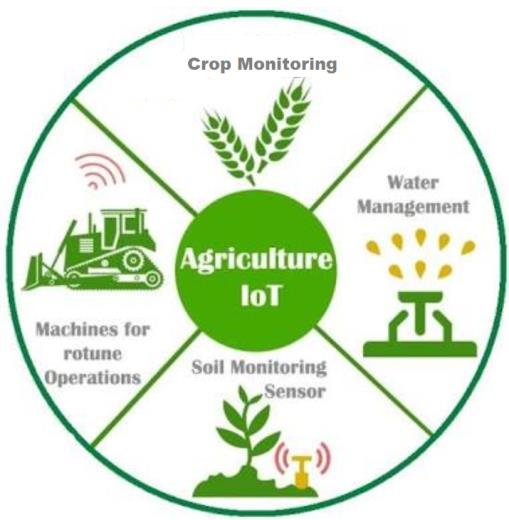 In this project, we will create an autonomous smart farm system by measuring the climatic conditions such as humidity temperature CO2 emissions then we will control the farm equipment such as water tank temperature inside greenhouse and Fire suppression system etc.
The system will be also controlled by the farmers using a website and a mobile app, the farmer can change the temperature, switch on and off the drip irrigation system etc. The website and the mobile app will provide a real time overview of the system so we can check the temperature, soil humidity… at any moment. In case of a failure in any part in the system the farmer will be informed by the website and mobile and an alarm is triggered.
The farm is also provided with a security system so when intruders try to enter the farm an alarm will be triggered and a SOS message will be sent to the farmer and the police
The energy to the system will be provided by a solar tracker panel

In this project we will design and implement a smart farm prototype.

Our project will greatly facilitate growing of plants by reducing the impact of climate on the cultivation process and minimize errors in production. Thus, the cultivation of various crops can be carried out in any climatic zones which will increase yields, ensure a sufficient amount of products for the population, and minimize costs in the process of growing.

The target audience of this device is very extensive from individual farmers to big farming companies.

The system is able to fully control the farm from measuring and adjusting different parameters and conditions to providing a  real time monitoring via a website of the whole system.

The first one is for the safety of the farm from incendies, lack oxygen or sudden increase in CO2 level.

The second one is to protect the farm from intruders and stray animals.

The FPGA Cloud Connectivity Kit will be very usefull creates a website where users can observe the whole system.

DE10 allows using all the advantages of SoC, combining the productive ARM HPS core and the flexibility of FPGA. HPS core makes it possible to locally implement powerful data processing algorithms and parallelize their execution at the hardware level using FPGAs. HPS core allows easily connecting to WiFi and Ethernet to communicate with an external server. In addition, the use of IP cores permits quickly implementing any additional hardware module on the FPGA logic. FPGA facilitates the implementation of any interfaces connecting different peripherals. Power supply (5V) permits implementing a safe and autonomous system with low power consumption.

The DE10-Nano presents a robust hardware design platform built around the Intel System-on-Chip (SoC) FPGA, which combines the latest dual-core Cortex-A9 embedded cores with industry-leading programmable logic for ultimate design flexibility. It also has a sufficient number of outputs for connecting modules.

Our project will greatly facilitate growing of plants by reducing the impact of climate on the cultivation process and minimize errors in production. Thus, the cultivation of various crops can be carried out in any climatic zones which will increase yields, ensure a sufficient amount of products for the population, and minimize costs in the process of growing.

our system will measure

Based on the data the system will be able to control

An initial prototype of a system made of materials at hand was developed for testing technology and preliminary development of technical solutions. Further, the entire system will be reworked and implemented at a new level.

This device is a guide system, control electronics, sensors, irrigation and loosening systems, as well as a greenhouse frame made of transparent plastic . The system can analyze sensor readings from different points of the farm and maintain specified conditions. The operation of the entire system is controlled by the FPGA De10  which, analyzing the sensor readings, itself makes decisions about the need to turn on a particular module.

Maintaining gas, light and temperature regimes of the environment is necessary for most types of crops. Therefore, a moisture and light control system was added to the prototype. Light control is carried out by turning on or off the LED tracks according to the performance of light sensors. The built-in fans control humidity and carbon dioxide levels. With an increase in these indicators, the ventilation system in the greenhouse is activated until the indicators come to a predetermined rate.

The system is equipped with a ventilation window for airing and oxygenating the greenhouse. The system also has a fan for air mixing. This allows the air to move freely around the greenhouse, as a result of which the temperature and humidity are evenly distributed and there are no sharp drops. And of course, the fan allows the pollen to circulate rather than settle, so even in the conditions of a natural winter, plants can produce fruit without the need of insects for their pollination.

Heating of water and soil occurs due to heating elements. Heating should be done with extreme caution, as the roots can be overheated and the plants will die, so a high-precision sensor is used to measure the temperature. And with direct heating, data is removed more often than usual.

The system can notify the user in an emergency, as it notifies the user about the state of the plants over time. Emergency situations can be: a fire (the air temperature sensor increases, the level of carbon dioxide increases markedly, the changes are drastic), the failure of some modules (that is why some of the especially important sensors are duplicated), the lack of some materials and others. Notification occurs through the site in the local network. Also there you can customize information about planted crops. But when planting, the system itself offers options for placing plants depending on their size and compatibility with each other, since not all plants can be planted together. This approach allows planting people who have a minimal understanding of agriculture, it will help prevent mistakes and make the harvest tastier.

another feature is fire sensor that will be used to control the fire extinguish system so in case of fire water will be automatically used, airing system will be activated and the farmers will be notified

during the night both batteries and thermoelectric generator will be used

The data request from sensors is as follows: reading of the carbon dioxide level occurs once a while, it takes a minute to warm up the sensor; humidity and air temperature; soil temperature; water temperature is measured immediately before watering and (if necessary) is heated, then checked after heating. Soil temperature data may be requested more often if the climate outside the greenhouse is very different from the internal climate, since in this case the earth cools faster. The frequency of measuring climatic parameters can be adjusted in accordance with the recommendations for growing plants.

In parallel with these process other processes are working

For the successful operation of the entire system, when it is installed and configured, the test mode of all modules is activated. Checks access to water, free movement of water along the hose, correct installation of sensors and the correctness of their operation, free movement of the cart and movement of the manipulator, the correctness of data transfer between the control and executive parts.
Climate change in the greenhouse occurs using different modules. Special phytolamps help prolong daylight hours for plants, with a lack of natural light. A ventilation and ventilation system is needed to control the level of carbon dioxide, humidity and temperature. Special heating elements buried in the ground help maintain soil temperature to prevent frostbite on the roots. Water is also heated using heating elements. Some of the heaters are located below on the side wall of the greenhouse next to the fan for even distribution of warm air throughout the space.

for power a solar tracker, we implement a novel approach to track maximum power point of a solar PV module. The idea is to use fuzzy logic and develop Kalman filter algorithm according to it to enhance the stability of the outcoming power from a solar PV module

During nights TEG will be used in reversed way(usually the sky facing side is the hot side and the ground facing side is cooling part) but we will harvest the thermel energy stored in earth and released during night as heat source and ambient sky as cooling side. but because power genereted by the TEG is not enough it will be implified from the batteries charged from the solar system

some flow chart and algorithms

The whole system RTL is